ONE:
Chris and I went to se Me and Orson Wells yesterday. We went to an early showing, a private showing if you will, because we were the only audience in the hugh theatre. The movie is about the the landmark production of Wells' and John Houseman's 1937 Mercury Theatre (Julius) Caesar. Christian McKay's portrayal of Wells was stupendous-the voice, the mannerisms, and most probably the vulgar, profane language of the creative genius. I don't know why all these great artistic geniuses have to be so vulgar and immoral in their "real" lives. It just makes me more satisfied that I did not pursue the professional acting career I wanted when I was young and went into education and communitiy theatre instead. While the acting and production values of this film were wonderful, especially the interior theatre scenes, I think it went beyond a PG13 rating for language alone, and the sexual content (continually talked about but not shown) was borderline R. We couldn't figure out for what audience the film was made. If non theatre young people don't know who Orson Wells, John Houseman, Joseph Cotton, et al. were, and the artisitic impact these men and the Mercury Theatre ensemble made on stage, radio and film, I don't think they would pay money to see this. Unless you are over sixty and an old movie buff like Chris and I are, you wouldn't have any schema on which to attach this film. I suppose younger audiences might go to see Zac Efron, who was very good, by the way, but I don't think they would catch the Wellsian, ground-breaking theatricality that is swirling around Efron's character. Another question we have is why was this film made in 2008 and only being released at the end of 2009 with little advertising? Anyway, Christian McKay deserves an Oscar for his portrayal of Wells. If you know little or nothing about Orson Wells or would like a little background, you might find this education site on the film interesting. http://www.filmeducation.org/meandorsonwelles/welles_caesar.html

TWO: This is purple prose and political, so you may want to skip it.
Chris would not let me watch any news or be political from December 24 to 26. She did not want me to fume about the clown congress passing horrible legislation in the dead of night. But alas, the great and self-serving Senate of the People's Democratic Republic of America, while throwing the late great United States of America under the Socialist bullit train, strained mightily in the night and with bribes and the persuasion of force brought forth an abomination of desolation which future generations of enslaved Americans shall rise up in their chains and curse. But, hopefully, the quagmire of both wings of the clown congress coming together to blend their abominations into one monstrosity will sink the whole mess and some actually inteligent reform might come forth. NOT
Posted by oldlibraryman at 6:05 PM No comments: 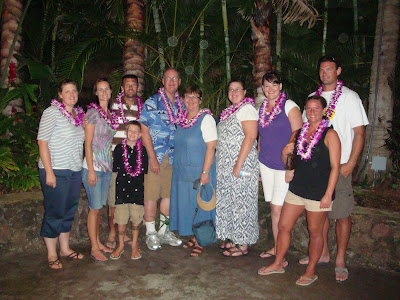 Merry Christmas to one and all. The snow from the 22nd of December is still clean and bright, so we are having a white Christmas. We had a big family and friend dinner last night at our home (24 guests), and the Big Guy with the flowing white beard (Bekah this year) came to cheer everyone with a little gift to tide us over till Christmas morning. Santa did a great job for the little ones who were with us, but Alex slipped once and called Santa "Bekah." I sent out 38 Christmas cards this year before the big day. There are a few more to get out when I find the addresses. Last year all my cards were late and became New Years cards. This is the picture I sent out this year. We took it after the luau at the Polynesian Cultural Center during our October trip to Hawaii, which was a Christmas present that we promised the family three years ago. It took that long to get everyone on the same scheduled week so we could actually take the trip together.

Posted by oldlibraryman at 10:50 AM No comments:

Email ThisBlogThis!Share to TwitterShare to FacebookShare to Pinterest
Labels: Christmas

I survived the winter solstice and am so ready for the longer days ahead. Today was my annual library open house for the teachers and staff at Mt Jordan Middle School. I started this open house a few years ago to treat all the people I work with. It is hard to give out little remembrances and cards at the Hanukkah, Christmas, Kwanzaa, and other religious/secular festivals at this time of the year and not forget someone or go broke or offend one or another of our diverse group. Everyone seems to like the schmooze time throughout the day, and I thoroughly enjoy it. I get to be Julia Child for a day.
I make hot sausage dip, three batches this year, will probably need four next year; cheese trays, crackers, chips, salsas, fruit and vegetable trays, salad and desserts. This year I added Grenache Marin-cabbage, noodles, and ham cooked in chicken broth. My aide helps with the food and set-up. Several teachers have also brought things to contribute to the buffet table. We ran out of somethings before the second lunch was able to make it into the library. Next year I will have to double up on everything.
I am taking the memoir writing class again this year for the fifth time. The second assignment topics did not thrill me, and after a month of false starts I threw something together the night before on the topic of a toy. Here it is:

The Box of Little Bricks
© Michael Goodman
While digging in a back yard flowerbed, I unearth a weathered piece of milled wood. A little brick shape, a quarter inch thick, two inches long with eight round nibs on one side and eight matching round slots on the other. Holding it in the palm of my hand, I turn it over a few times rubbing off the dried, powdery clay. The once bright red stain, where it hasn’t worn off, is faded to a pale, dusty pink. This relic was part of my “Santa” present in 1959 when I was barely twelve.
Actually, my big Santa present was a deluxe magic set that had some parts missing out of the box. The week after Christmas, my mother took me back to the toy warehouse where Santa had bought it. Unfortunately, there were no other deluxe magic sets in stock, but not being too interested in magic tricks anyway, I wasn’t extremely disappointed. Especially not when my mother said I could buy whatever I wanted from the store, as long as it didn’t cost more than the refunded money.
I ambled up and down the aisles of floor to ceiling shelves carefully investigating and examining box after box of play time fillers that would totally bore an electrified kid of the 21st century. It must have been an expensive magic set because I was able to buy two big toy sets: a huge set of Civil War battle figures complete with soldiers, horses, cannons, caissons, supply wagons and assorted accoutrements molded in blue and gray plastic; and a heavy box of miniature, wooden building bricks.
My sister and I spent hours on end sprawled out on the floor of the den building houses for her paper dolls with the bricks and our old Lincoln Logs. I am sure we exercised our imaginations and had more fun with those building bricks than anything else we ever owned.
In the first couple of years of high school, I had a few friends who enjoyed combining the bricks with the Civil War set to have massive battles with bombed out farm houses and walls. It is impossible to picture high school freshmen and sophomores today doing anything akin to that. We, or the times we lived in, were much simpler then, less sophisticated. We discovered that the bricks were fairly steady when stood on end like dominos, and we pains-takingly created long interweaving lines of “brick-inos” that would start a cascade with the least breath. I later gave away what was left the Civil War set, but I kept the box of bricks.
Mastering the art of standing the bricks on edge, I fashioned structures that resembled Greek and Roman architecture, my classical period. On a base of interlocking bricks, I arranged vertical bricks in rows like columns. On top of the columns, a double row of interlocked bricks solidified the structure and allowed for another level of columns to arise or for a carefully gabled roof to be built. Those miniature temples were amazingly sturdy until a strategic column or two were removed and sections would collapse like a fabled edifice of antiquity. Even in college, when I needed some down time from work and school pressures, I would pull the box of bricks from under the bed, clear a section of my desk, and build a fantastic structure fit for the Olympian gods.
After leaving California to finish college in Utah, and marrying, having children and buying a home, the box of bricks showed up at my door one year in the back of my parent’s truck along with other childhood paraphernalia that my mother miraculously had not thrown away. We stored the tattered, sagging box in the basement until our children grew older; then my wife let them play with the treasure of my early years. They scattered the bricks throughout the house and into the yard, and over time my treasure, which meant nothing to them, was lost to all but memory.
I turn the artifact over in my hand several more times and put it in my pocket. There are days even now when I wish I had my box of little red bricks, the ancestors of the boxes and bags of shiny, multi-colored, sterile, plastic Legos that infest the toy cupboard in the family room.
Posted by oldlibraryman at 12:04 PM 1 comment:

Wow! I haven't written anything since last April. It doesn't matter; no one reads this anyway.
I finished all my Christmas cards today and mailed them. I am trying not to think of politics and the Liberal Progressives destroying the country I love at this time of the year. That would be easier to do if the Clown Congress were not ramming through corrupt legislation in the middle of the night. Well, I just cannot NOT think about such things it seems. It is so over-poweringly oppressive and depressing. It is as Lincoln said - no foreign power can rise up to destroy the United States, only we ourselves can do that. The next election is too far away to save us.
Posted by oldlibraryman at 1:03 PM 1 comment: