More (Mis) adventures in the Garden.

I took a couple of pictures of the flowers in the  front garden. The combination of snapdragons and larkspur I think is nice. 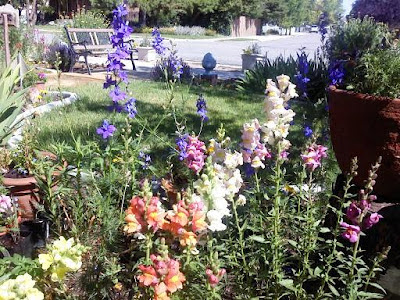 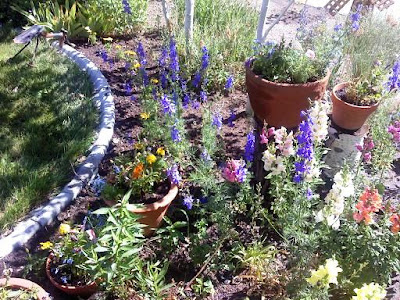 On Thursday I went out in the vegetable garden and found, as was afraid I would, that I had left the board in the irrigation box when I was irrigating the fruit trees at the back of the lot, and I discovered, as I was afraid I would, that the water had overflowed into the areas between the planted rows. The overflow had left a large area of mud in the corn rows and beans (which are still being devoured by invisible bugs). While attempting to step over a swath of mud, I twisted my right knee, the knee in which I have the most arthritic damage. The knee let out a snap, crackle, pop, and I let out a "Yeaow" in reaction to the ice pick jab of pain. I precariously regained my balance on the edge of the mud pit. After a few moments of deep breathing and pain induced vocalization like breathy, silly laughter, I hobbled laboriously into the house and immediately applied ice packs to the knee. Later that evening, I did a little watering in the front garden propped up with a cane in each hand and sitting often on the garden bench I have out by the sidewalk. (I put the bench there for passers-by to have a "sit and rest a spell" when walking through the neighborhood. No one has used it but me, but it is there to use if you happen to pass by.) The LDS missionaries walked by at that time and asked me again, as they do every time they see me, if I needed any service. I told them they could help me water the garden on Friday, to which they replied, "That sounds like FUN!". I proceeded to spend a miserable evening and night with a hot, swollen knee.

Early Friday morning, I called my doctor's clinic for an appointment. He was booked, so I was given an appointment with another doctor at the clinic. He turned out to be very young, but very with it. After turning, twisting and x-raying the knee, he concluded that I had not torn any ligaments but had damaged the meniscus and time would tell if it will heal on its own or need surgery. He gave me a packet of instructions, a list of exercises, and a prescription and wished me luck on my trip next week.

The missionaries came at one o'clock and watered the garden under my direction. They asked me how often I water. In this heat I water every other day. Immediately they said they would come back every other day to water for me, even when I am in California at the American Library Association conference. All summer if I want them to. "We love to give service." My daughter-in-law, Emery, came over in the evening and planted the last of the zinnias for me. I have had lots of service given to me because of my misadventure in the garden.

After a day of high powered ibuprofen and ice packs and walking as little as possible with two canes (easier than crutches), I spent a good night with no pain. This morning, Saturday, I have a little pain, but I am "resting" and icing and taking the prescribed anti-inflammatory. Well, my knee is aching again, so I think I will go take a nap before I head off to the Saturday evening session of stake conference where all I have to do is sit and listen.
Posted by oldlibraryman at 3:08 PM No comments:

Email ThisBlogThis!Share to TwitterShare to FacebookShare to Pinterest
Labels: garden

Adventures in the Garden

I have spent all day Monday and half of Tuesday working in the vegetable garden at the back of my lot and in the front yard flower beds. I have to say that I can deal with the noxious weeds afflicting me, but I didn't see anything in Geneses about hellish, unseasonably hot weather, damnable winds, and abominations of desolation, bugs, that is, afflicting and tormenting the poor, amateur gardener, me.
Only half the thirty foot row of carrots sprouted, and I reseeded the empty end of the row. Not much came up in the reseed. Peas came up so sparse I think I will just till them under. The potatoes, beets, and onions are doing very well. I replanted the parts of the five rows of corn that didn't sprout. I try to plant according to the old rhyme: "One for the worm, and one for the crow, one to rot, and one to grow." Apparently I need to double that recipe. 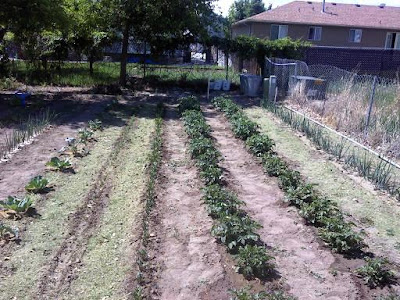 This is the east end of my 2100 square foot garden (facing south) as it looked the first of May. White onions, potatoes, beets, carrots, broccoli/cabbage, and purple onions in thirty foot rows. I really don't love onions that much, but years ago before the houses were built behind us the field was rented by a Japanese farmer. When he planted onions, we had very few bugs; when he planted field corn, we were plagued with the abominable creatures. Two rows of onions don't seem to ward them off though. It must take 50 acres of onions to do the job. 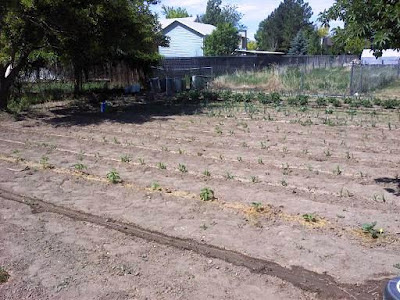 Another view of the east end of the garden on the first of May with five rows of corn, a row of peppers and a row of pole beans still in the ground and just watered. I didn't plant tomatoes and zucchini  on the west side of the beans until May 15th, the traditional safe day from late frost.

Some species of invisible bugs ate my first showing of beans down to nubs after I struggled to keep them alive under the scorching sun. I have heard that marigolds are a natural bug repellent, so I had planted lots of marigolds in and around the vegetables. The abominations devoured the marigolds down to dirt level as soon as they made it to three or four inches high. So much for that bit of wisdom. I applied a general spray for insect control and replanted. The new beans are just starting to break through the soil. I feel like I need to go out with a magnifying glass to see if I can spot any abominations before they eat the new crop. 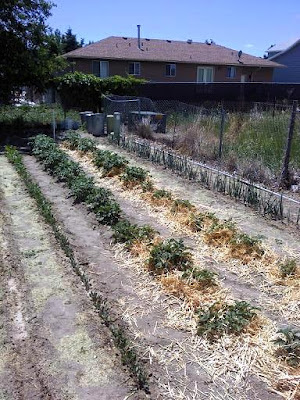 On June 11, I was half way through strawing the potatoes before mounding the dirt up around the plants. I have read anecdotes that potatoes will grow in the straw and will be easy to harvest. We will see if that rumor is true. 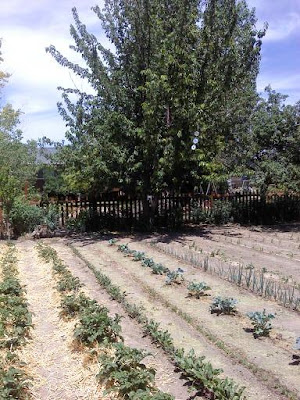 When the strawing was finished, I tilled the ground between the rows and raked the dirt up onto the potatoes and irrigated. Exhausting! 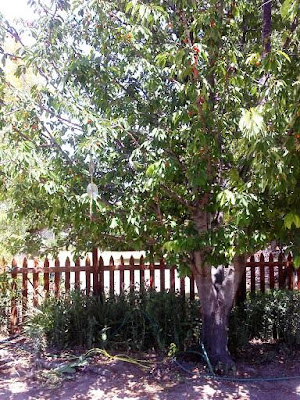 This is my Lambert cherry tree. If the birds don't strip it clean before the cherries are ripe, I should have a bountiful harvest. The birds have already cleaned out my mulberries. Drat! I am one of the few poeple in the world who likes mulberries. If you look closely, you can see old CDs hanging in the tree. I have been looking for reflecting tape, but no stores are stocking it this year. The flashing tape frightens the birds and they stay out of the fruit trees. The CDs flash sun light through the tree branches and seem to be working as well as the reflecting tape. 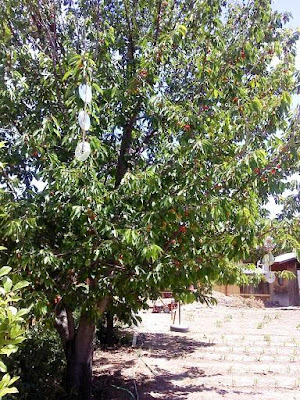 Posted by oldlibraryman at 12:13 AM No comments: 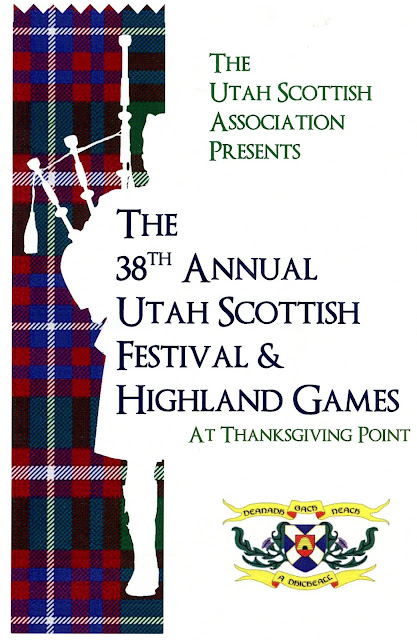 Spent about five hours yesterday at the Utah Scottish Festival and Highland Games. My daughter Emma, danced in the competitions. Though her ankle gave out on one of the dances, which caused a slight wabble at one point, I thought she was wonderful in the Highland Fling and Sword Dance. She didn't place in the top three of any of the dances. Sad, but she's a trooper. She does have boxes of trophies and medals for Irish and Scottish dancing already, but it is always nice to be rewarded for a fine performance, which I think she gave. 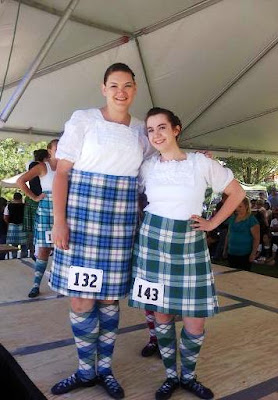 Emma and life-long friend, Sarah Lindsey. before the competition.

Look at these flying feet! 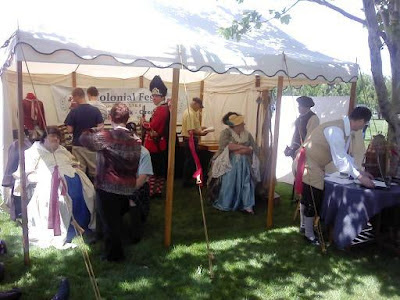 This is one of the many booths at the festival. It was advertising the Colonial Festival in Orem during the 4th of July week. I didn't take any pictures of other booths because they were too crowded with celebratory people, and I was too far away from the pipe bands and other entertainment to take a good picture with my phone.

I renewed my membership in the Utah Scottish Association and put my name in for the kilt drawing, which I never win. Gale force winds started up in the afternoon and was filling the air, and my eyes, with dust. If the dance tent hadn't been ancored to huge cement blocks, the wind would have blown us all to Oz. Several clan booths were uprooted and scattered about, and many a kilt was flapping in the breeze. At least it wasn't pouring rain as in several of the past years.

Posted by oldlibraryman at 6:24 PM No comments:

I sent out twelve congratulation cards to 2012 graduates that I have worked with in the past four years. Six to West Jordan High young men with whom I have worked in the Venturing Scout program since they were 16. They are very nice, hard working young men from whom I expect great things in their future endeavors. 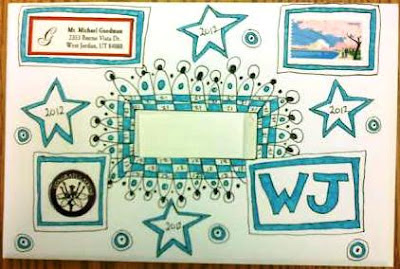 I sent the other six cards to Jordan High School graduates who were former students of Mt Jordan Middle School and were 9th grade student body officers for whom I was advisor. They too have turned out well and have bright futures ahead of them. 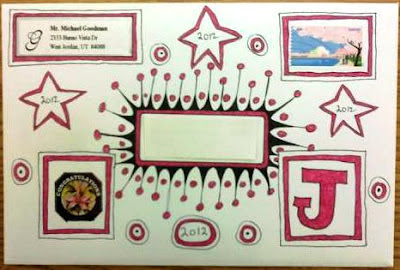 Posted by oldlibraryman at 11:06 AM No comments: