Went to the post office again to mail some more letters and post cards for sendsomething and postcrossing. I found out from Richard, the postal clerk, that post cards cost $1.05 to all countries outside the USA except Mexico and Canada. They are only 85 cents. So I sent one post card to Belarus and the rest within the USA. I have received one post card from a sendsomething member. Here are some that I sent. 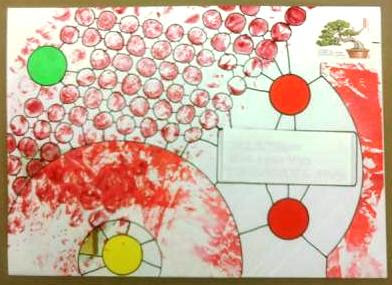 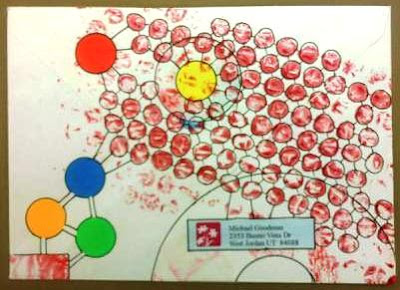 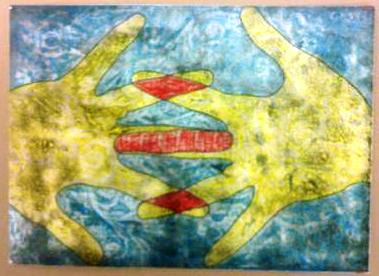 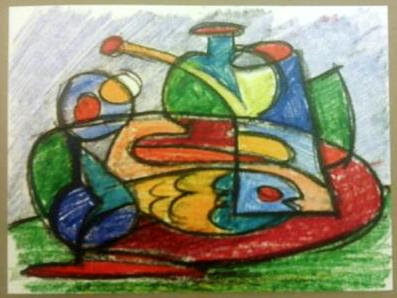 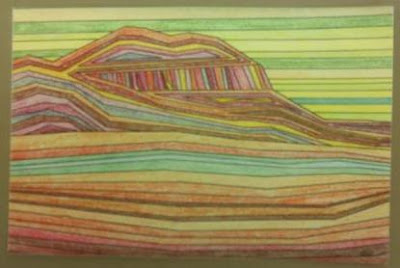 Last Saturday, my wife, Chris, and I went to see The Artist. What a brilliant piece of film work. Chris liked it, but not as much as I did. The music score is lovely, mostly original, but there is a large section of music from Vertigo by Bernard Herrmann. I have not figured out the connection, assuming there is one, since everything else in the film seems to be tightly constructed with few superfluous throw aways. Maybe I will discover the connection as I think about it a while longer.

On Presidents Day, we attended the Hale Center Theatre's U.S. premier of Zorro, the Musical. We enjoyed it, but I felt like it was a bit too long and could use some cutting, or some tightening up at the very least. The music was all familiar to me since it is made up of the more popular songs from the Gypsy Kings, at least popular among those who like the Gypsy Kings. I have two of their CDs and am known to play them very loud from time to time when I am in that certain flamenco mood.

The Friday before, my daughter, Rebekah, Chris and I went to the Ballet West production of Don Quixote with music by Ludvig Minkus. That was a very enjoyable evening with lots of traditional ballet sets and magnificent solos and duets with the principal characters, and it wasn't very long. Only a couple of hours as compared to the Saturday previous when I attended the Metropolitan Opera's HD broadcast of Gotterdammerung: six hours of stupendous music and wonderful singing.

Ballet West is doing  Petite Mort (which is bad French but great dancing) in April. I wait with anxious anticipation for this production. I have seen the Jiri Kylian Nederlands Dance Theatre on YouTube at least 50 times.
Posted by oldlibraryman at 3:08 PM No comments:

Mail Art and Odds and Ends

I just joined a web site for people who like to send and receive mail art, ATCs and other odds and ends in the mail. (sendsomething.net)  I also joined  an international postcard club that looked interesting.(postcrossing.com)  I don't plan on sending out too many of those. The cost of the post card to The Netherlands that I sent out last week cost $1.05. That was for a post card!

The last time I went to the post office to send out my decorated envelopes with a family and friend news letter, the postal clerk looked at the envelopes with a "curious eye." "I am trying to save the post office," I said. "There are many of us around who still like to write letters, and send them out by post. We just add a little decoration to the envelope and send them out as postal art."
"Well," he mused, "that sounds pretty good. Keep it up."

So here are some front and back views of three of the letters I sent out today. The light red is a low tech contact print with ink outlines. The links between the "bubbles" are a little hard to discern in these phone-camera photos. I sent these out to a few people whose addresses I found on the sendsomething web site. I looked at the profiles of over a hundred members before I chose these addresses.

All of these dots together are a bit over the top. The individual envelopes one side at a time are less intimidating to the eye.

﻿
﻿ This evening I have a five minute oral presentation in the Artists' Books class on Alisa Golden and her Never Mind the Press. I chose her because twelve years ago I purchased her book Creating Handmade Books. It was the first "how-to book" on book making that I purchased to use with students at school. I had taken a few educator workshops on book arts at the University of Utah, so I was familiar with a lot of origami book folds and simple sewn book forms. Her book shows a variety of book forms that students and adults can manipulate to create interesting books. She has had an extensive career as a book artist. On her web site she says, “In addition to making books, I have taught book structures and printing in the San Francisco Bay area, the San Francisco Art Institute, the San Francisco Center for the Book, and Ocean View elementary school. Currently, I am Adjunct Professor at California College of the Arts and call it my home, again. I'm on the schedule to teach "Writing and the Creative Process" in the Arts & Consciousness program at JFK University in May 2012.

Posted by oldlibraryman at 1:23 PM 2 comments:

I received my grade for the "book 0", i.e. the first book assignment in Artists' Books II class last Tuesday. I had 94/100 points. That is higher than I expected because it was an experiment with a flip book that did not work well. The glue and the paper made one side thicker, as I knew it would, but the paper also curled more than I expected, and three days in the press did not flatten it. The curl made the flip action less than ideal. That is what I lost points on. 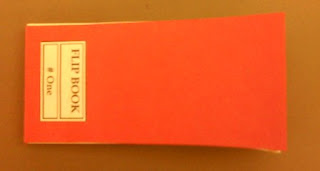 This is the flip book that failed.
I have been working my brain to the bone to create a book to fulfill assignment number two. I decided to use a photo series from Eadweard Muybridge's Animal Locomotion in an accordian book. I chose plate 168; two boys playing leapfrog with a side view and a facing view. I call it LEAP from the "front" of the accordian and FROG from the "back." The images were photocopied on manila drawing paper and carefully torn into small panels. I really like the soft images on the manila paper. Using double sided tape, the panels were afixed to the accordian pages. Except for the manila paper, I don't know what type or grade of paper I used. I rarely buy paper, so I use what bits and pieces I can find in my file drawers that I have collected over the years. The heavy black paper that I used for the covers was too thick. The folds gave me fits. I will not use that paper again for anything that needs precise folds. I like the results, eventhough it may not be within the assignment parameters.

This is the middle of the "front" before the covers were added. 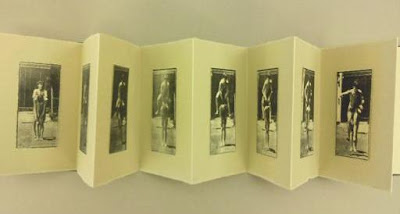 The "back" view before the covers were added. 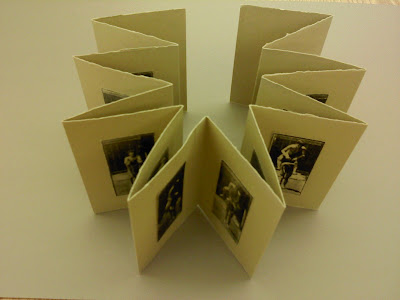 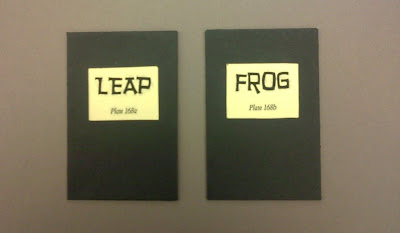 The covers before attaching to the accordian. 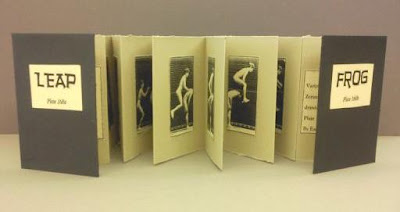 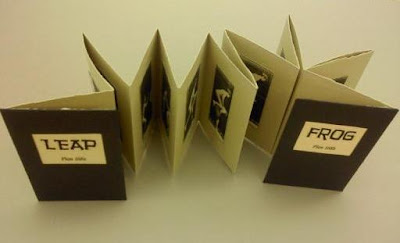 I am planning to use more of Muybridge's Animal Locomotion in future book arts projects. I discovered his work in the 1960s while brousing the library art and photpgraphy books at Long beach State College. Then Dover Publications printed a three volume set of all 781 plates in the 1970s. I bought a single condensed volume of 100 or so selected plates, because I couldn't afford to buy the three volumes. I used some of the action series in a few art projects and collages that I was playing with at the time. At one time I built a zoetrope out of posterboard which turned on a record player. I made strips of Muybridge photos to play in the zoetrope. Quite a fun experiment.
Posted by oldlibraryman at 3:21 PM 1 comment:

Tomorrow is my daughter Rebekah's birthday. I am giving her a hand made journal that I made, because she is a committed journal writer and rarely ever misses a day. I need to be as committed as she is. Boy would I get things done. 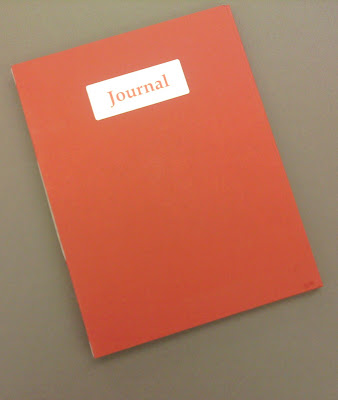 The cover of the journal wraps around the text block from the front, back and sides, and folds under the front cover.

The binding is exposed on the spine
Posted by oldlibraryman at 2:05 PM No comments:

But Is It Art?

We have had two Tuesday class times in Artists Books where we get to examine artist books from the University of Utah Marriott Library's rare books and fine arts collections. The rare books selections are an interesting way to spend time, and I have examined a few book structures that I would like to try out on my own, I do wonder sometimes what makes these artist books art when I have done bindings with sewing and gluing just as good as these. Some of the texts in these books are not really that creative, just strange and often weird, and of course a few of the author "artists" have to throw in a filthy word or two to prove that it is relevant "art." But is it art?

The selections from the fine arts collection is even more questionable. They remind me of the photo and "art" books that I saw in the book store and library at Long Beach State College, now University of California at Long Beach, in the sixties when I was an art and theatre student there. There were also a lot of these books at the Free Press Book Store in L.A. where I occasionally browsed the shelves. While some of them were clever and eye catching, most of them were just vulgar exhibitionism. They justified it by calling it "art" or "avant-garde" or an expression of rebellion against the moral confines of the ESTABLISHMENT. I should have bought a few of those books back then. I would have quite the "fine art" book collection now, but I would be too embarrassed to show it off.

I did find a couple of the fine art selections to be fascinating in their presentation, Photogrids by Sol LeWitt and Babylonian Misapprehension by Gary Richman. I spent a lot of time examining those two books with a cursury flip-through of the rest of the books. Another book that was put out for us to examine was More Than Meat Joy : Complete Performance Works & Selected Writings by Carolee Schneemann and Bruce McPherson. This had a lot of blury photos of performance "art" with twenty somethings stripping off their clothes and dancing around or rolling on the floor, etc. Is that art, or just a bunch of perverted people calling what they do art in an attempt to justify their perverted view of the world and have the intelligencia heap extravigant praise upon  it as an artistic expression of the modern human condition. But is it art? 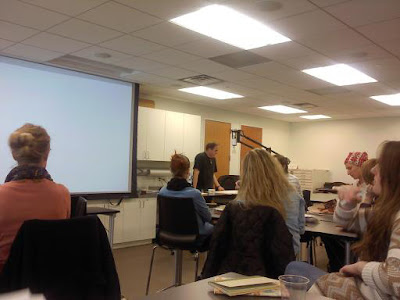 Posted by oldlibraryman at 10:09 PM No comments: