I just sent out an ATC swap with a handmade envelope. It is an early St. Patrick's Day ATC. The background is layered tissue paper using a glue wash to adhere the tissue to poster board. The envelope is made from a magazine page with some stuff glued on. I never know if I have too much or too little. 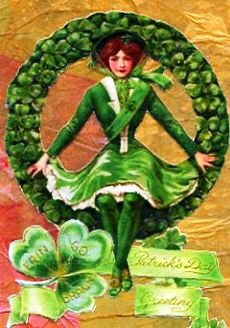 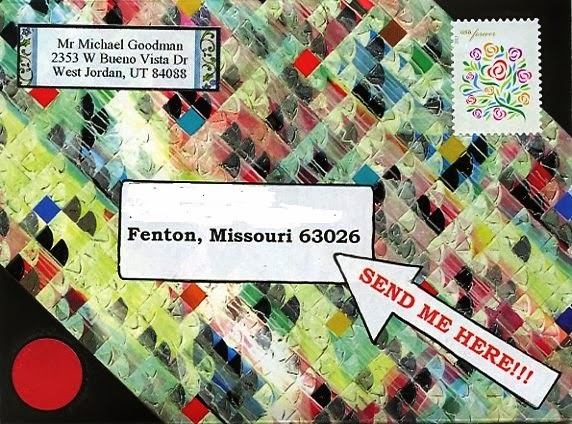 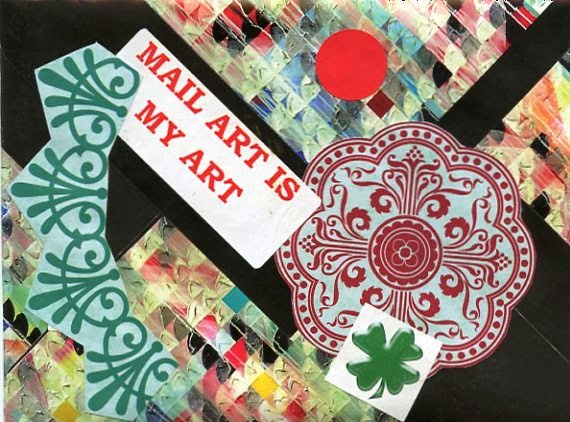 While composing this tiny post, I am listening to Virtual Choir. It is hard to concentrate with 5000 voices singing at me, so it is taking longer than I planned to post this. Oh, well. Erin Go Bragh!
Posted by oldlibraryman at 5:47 PM No comments:

My daughter-in-law's father sent me this "Older Than Dirt Quiz" this morning. He is ten years older than me, but I remember all these items. I thought it was amusing and it starting me thinking about a lot of things we no longer have. I wonder sometimes if all "progress" in all areas of life is really that great. I am putting the list here. I added some details to a couple of the items, but the list is basically the list I was sent.

Count all the items that you actually remember: not the ones you were told about.  The ratings are at the bottom.

1. Blackjack chewing gum.
2. Wax Coke-shaped bottles with colored sugar water.
3. Candy cigarettes.
4. Soda pop machines that dispensed glass bottles. Especially the cases full of ice water with the bottles suspended in the water on metal tracks. You maneuvered the bottle of pop you wanted around the track to the "gate," put your coin in the slot, and pulled your bottle through.
5. Coffee shops or diners with tableside juke boxes.
6. Home milk delivery in glass bottles with cardboard stoppers.
7. Party lines on the telephone.
8. Newsreels, short subjects and a cartoon before the movie: and you could stay and watch the movie more than once.
9. P.F. Flyers.
10. Butch wax.
11. TV test patterns that came on at night after the last show and the National Anthem and were there until TV shows started again in the morning. (Depending on where you lived, there were only 3 channels).
12. Peashooters.
13. Howdy Doody.
14. 45 RPM records. (Sometimes the B side was more popular than the A side.)
15. S & H green stamps.
16. Hi-fi's.
17. Metal ice trays with a lever.
18. Mimeograph paper.
19. Blue flashbulbs.
20. Packards and Studebakers.
21. Roller skate keys.
22. Cork popguns.
23. Drive-ins.
24. Putting pennys  on railroad tracks to be flattened by trains.
25. Washboards and wash tub wringers.
26. Diners made from old street cars.
27. Street Cars that ran on a track.

If you remembered 0-5 = You're still young

If you remembered 6-10 = You are getting older!

If you remembered 16-27 = You're older than dirt!
I remember dealing with all these items save one; I never had Blackjack chewing gum.

Posted by oldlibraryman at 3:10 PM No comments:

While sorting through a box of old art papers, bits and pages from magazines and other fodder that I have saved for art projects and collages that are yet to be created out of the chaos, I found a folder of black and white op-art that I have had for at least thirty-seven years. Most of the pieces are copies of student work from the early years of my career when I taught art at Union Junior High. They are the high contrast black and white, geometric designs which if looked at too closely or too long cause the eyes to cross and summon hallucinations, head aches and, in extreme cases, a dead faint. Best to be avoided, but if not, at least taken in small doses. 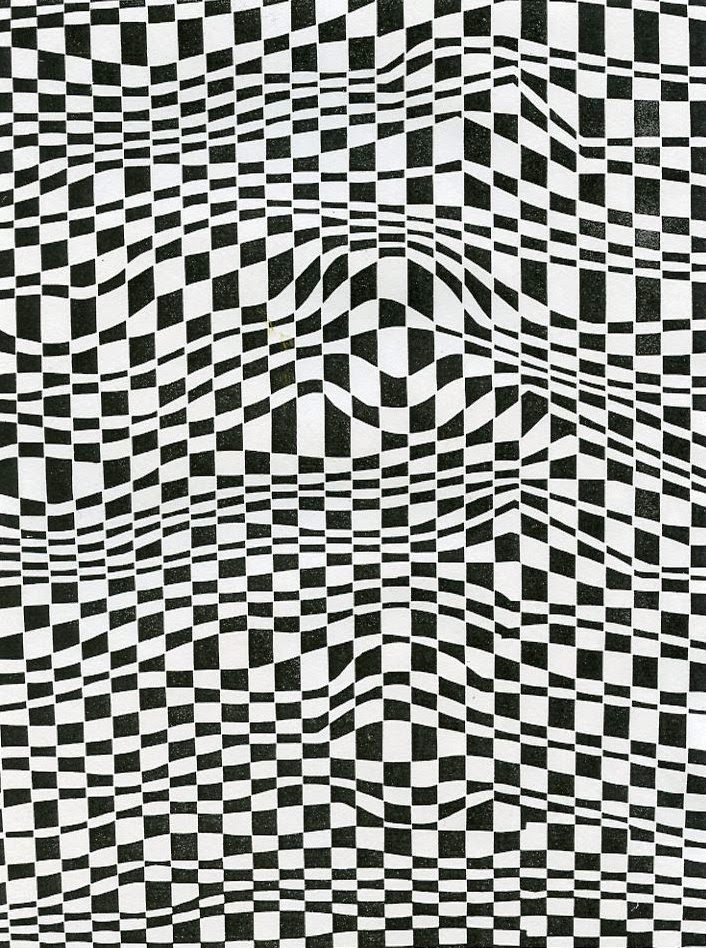 So small it is. I made some copies on cardstock and chopped the sheets into 2 1/2 by 3 1/2 inch cards. Then I broke out the gel pens and started to alter the cards. I have a black and white ATC trade coming up, so I used three of the cards as a background for a set of chat noir cards. 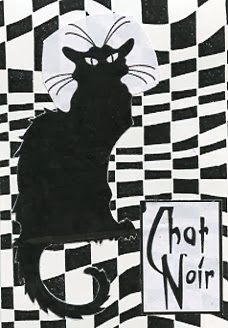 I used a few others as backgrounds with some cutouts from magazines, but most of the cards I have been coloring with the gel pens. Here are a few cards that have been colored, but are not in a final, finished form. 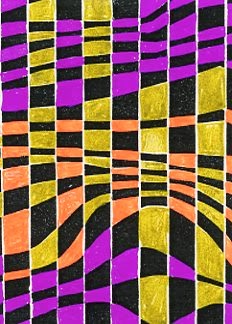 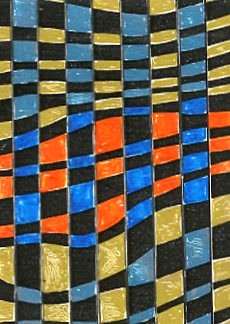 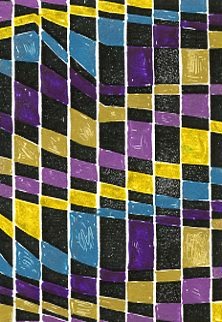 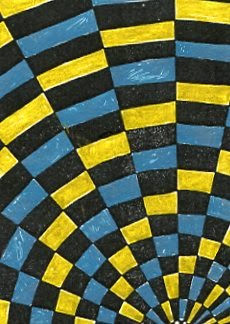 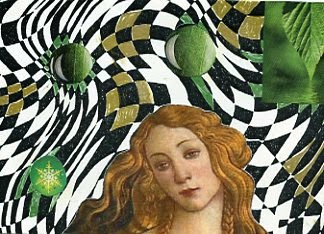 Posted by oldlibraryman at 9:25 PM No comments: 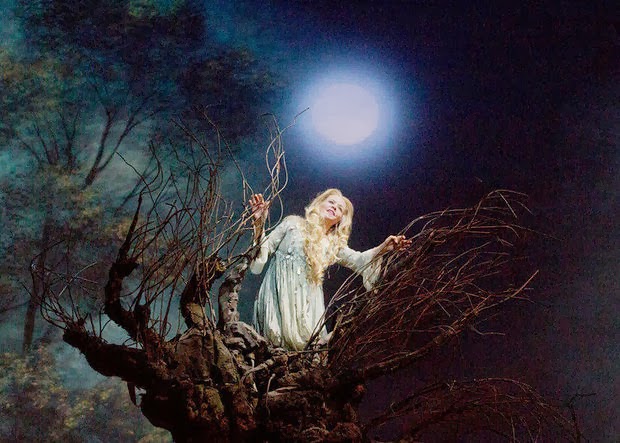 Last Saturday, I spent a big chunk of the day enjoying the Metropolitan Opera HD broadcast of Antonin Dvořák's Rusalka. The visually and vocally gorgeous Renee Fleming was superb as the tragic heroine, the water sprite Rusalka, who wants to be human so she can pursue her prince and experience human love. In this production, Rusalka sings her "Song to the Moon"  from a tree above the waters of the lake. How a water sprite ended up in a tree is an interesting question, but it's not important. The plot is similar to Hans C. Andersen's story "The Little Mermaid." But, alas, Rusalka does not have a hopeful ending as does the the little mermaid who is given a soul and the promise of ascending to Heaven; and this is certainly not a happy Disneyfied fairy tale. No happy ending here. Poor, pale Rusalka is cursed to wander for eternity between life and death as a ghostly figure, neither human nor water folk.
One of the wonderful parts of the Met HD experience for me is to see the sets being moved about and assembled during the intermissions. Speaking of the sets, the illusion of Rusalka walking on the water of the lake at the end of act three was beautiful. For the non opera crowed, Renee Fleming was the beautiful soprano who sang the National Anthem at this year's Super Bowl, which game I did not watch and apparently didn't miss much.
I am looking forward to the rest of the HD broadcast season; especially Massenet's Werther with Jonas Kaufmann in March and Rossini's La Cenerentola with Joyce DiDonato in May.

Posted by oldlibraryman at 12:57 PM No comments: 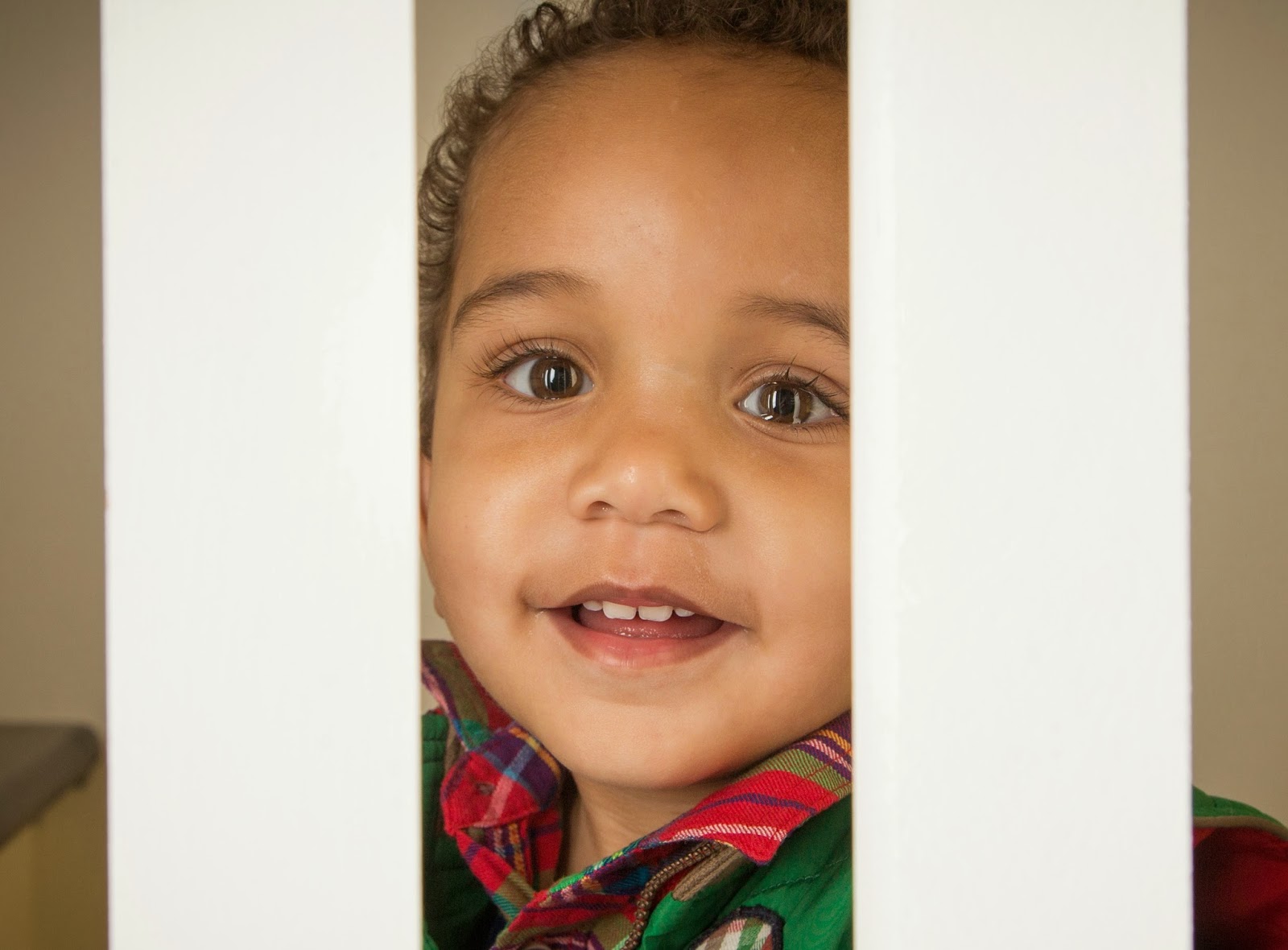 My daughter-in-law sent me the picture above this morning. Baby Gabriel is an angel. He has been in our family since he was three months old. He is almost two now. His adoption was finalized on 31 December 2012. When he was placed in foster care with my son's family, their first foster child, my son was out of town working. The night he returned, he picked up the baby and was rocking him. My daughter-in-law told him to not get too attached, because it was a temporary, emergency placement. My son looked into the baby's eyes and said something like, "Nope, this baby is ours. He's supposed to be with us." Truly prophetic. 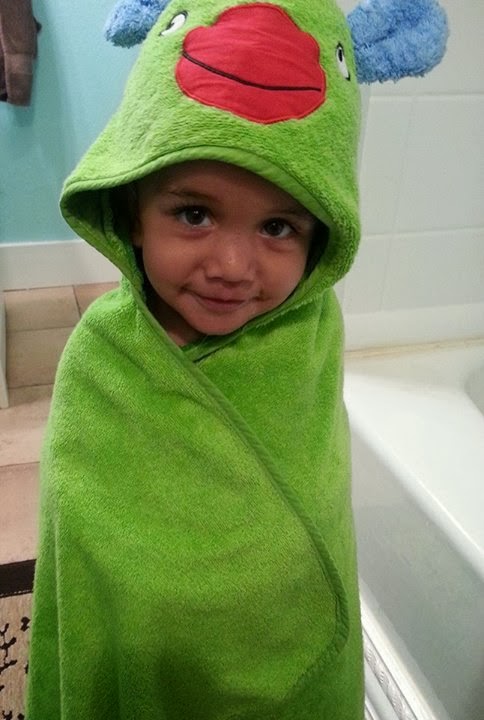 He certainly loves to pose for the camera.

Posted by oldlibraryman at 11:24 AM No comments:

I just finished two separate ATC trades with the theme of postage stamps. The challenge for both trades was to make a collage of stamps for the background of the ATCs. That was not too difficult a task, but trying to decide what to do as an embellishment or for something in the foreground had me stumped for a few days. The stamps came from a box of stamps my grandmother sent me in the 1960s when I was an avid stamp collector. She had a friend who worked for a publisher, and the friend gave the stamps from the manuscript packages to my grandmother to send to me. I have dozens of the same stamps, mostly five  to eight cent commemoratives. I made both collages the same, but the second one has two different stamps. I could do a comparison puzzle with the two; "How many differences can you spot between these two cards?"
For the finish on both cards, I cut out the "golden five" from two little copies of Charles Demuth's painting, The Figure 5 in Gold, and glued them down over the stamps. I thought that tied the card together: five cent stamps and the number "5." I outlined the stamps and the fives with black gel-pen. My hand is not very steady any more, so there is a wobble on the outline of the fives of each card. That just proves it was handmade, right? 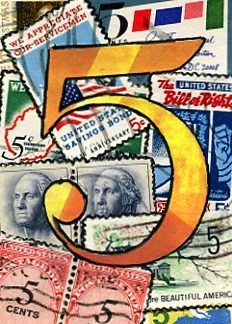 I also sent off a card in a "Heart" ATC trade. That one started as a copy of a scherenschnitte Valentine that I made a few years ago. I scanned it and reduced the size to the dimensions of an Artist Trading Card, 2 1/2 in.  x 3 1/2 in. Using pen and ink, I added dots and some squiggles to change it a bit. I have used copies of this paper cutting for ATCs in the past. 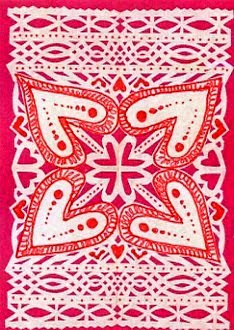 Using the envelope maker that my daughter gave me for Christmas, I made the envelopes to send off the cards. The papers I used were wallpaper, and pages from magazines. I worry about the magazine pages going through the postal sorting machines because it is thinner than envelope paper, but I have sent some magazine-page envelopes through the mail successfully in the past. Here are some before and after shots of two of the envelopes, front and back: 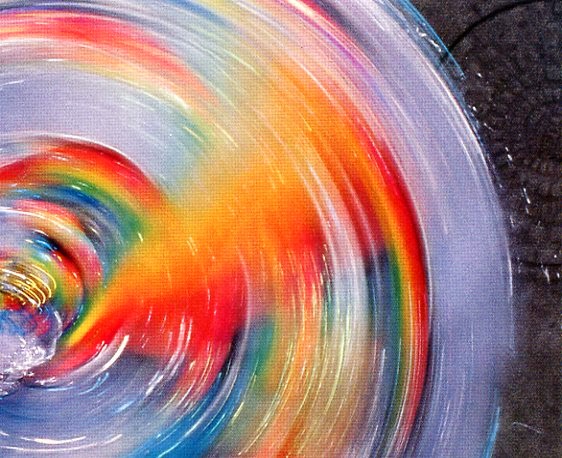 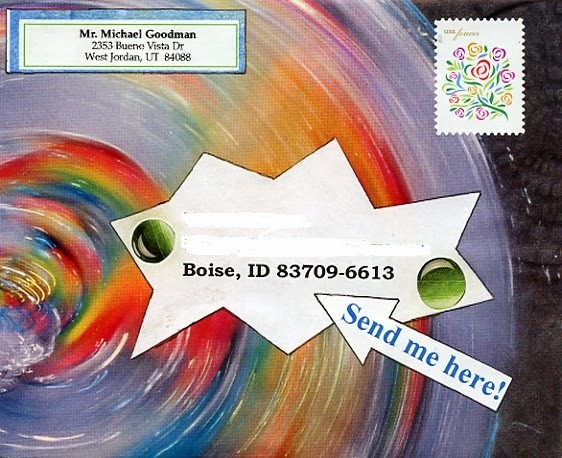 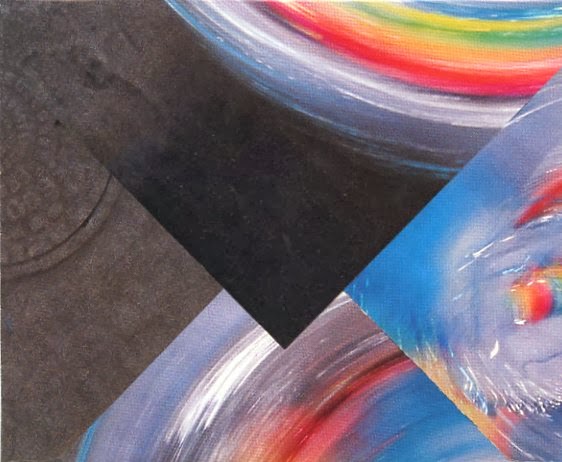 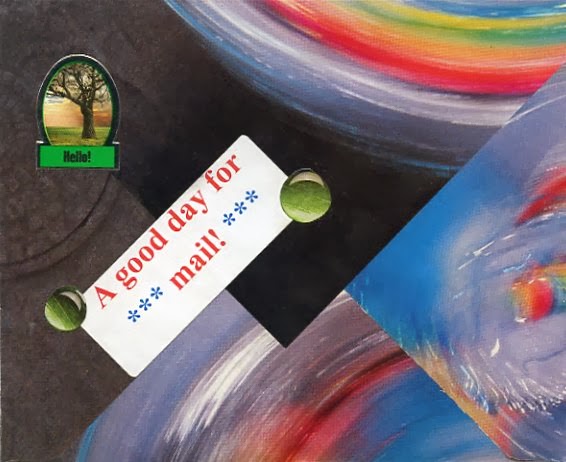 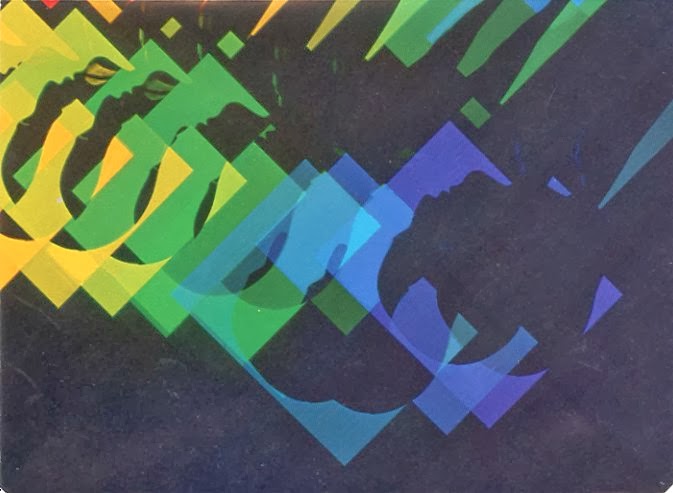 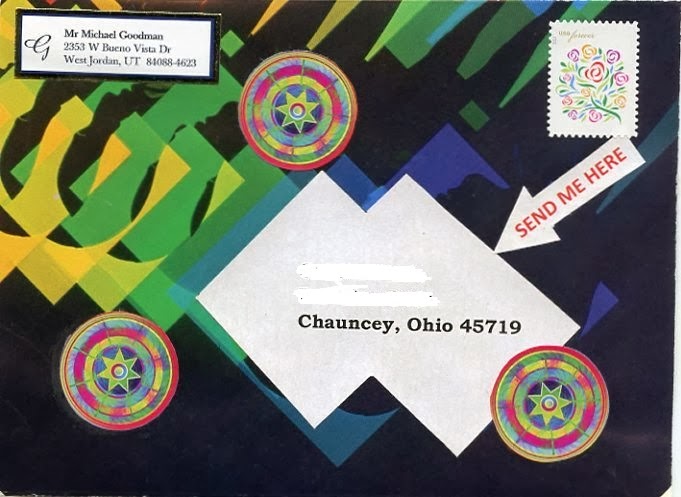 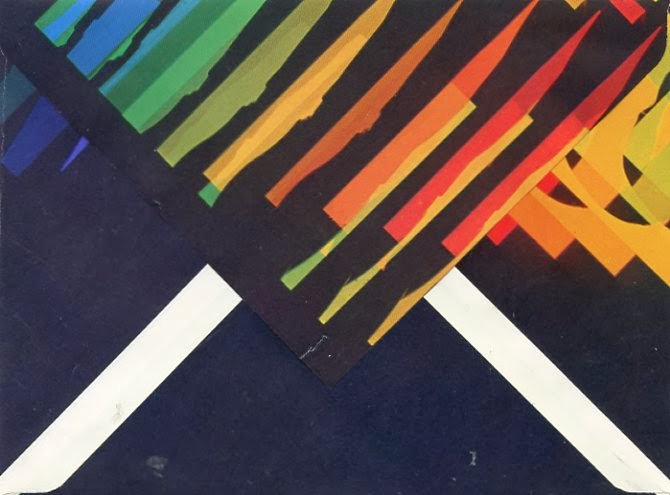 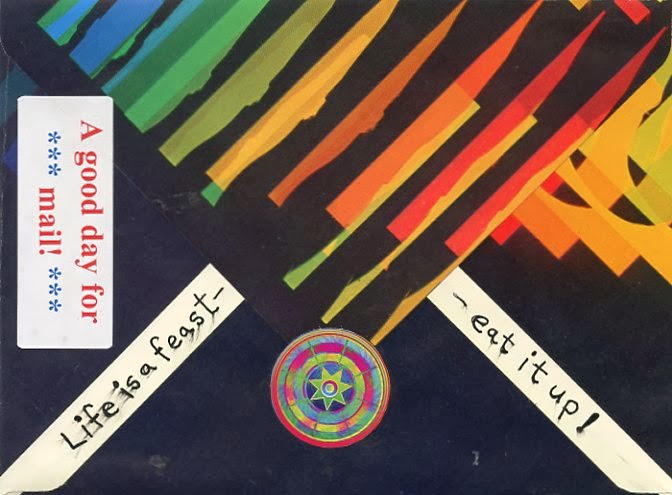 Posted by oldlibraryman at 6:41 PM No comments: