This is my book number two for the Artist' Books class: Eighty Million Dead. I was inspired by seeing the opera, Nixon in China. The music by John Adams is a driving repetition that gave me the idea of a driving repeated theme running through the whole volume. I designed the pages around quotations from Mao's Little Red Book, Communist propaganda, and old photos of the Communist regime. The repetitive element is the silent chant of "eighty million dead" in English and Chinese on each page. Jesse Peng, the Chinese teacher at Mount Jordan Middle School, helped me with the Chinese calligraphy and the cultural elements. "Eighty million dead" comes from the high middle range of estimates on the number of those who died under the reign of Mao Zedong either by design or as collateral damage from his failed policies. 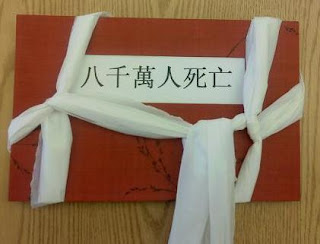 The materials I used were things that came to hand: cheap white drawing paper, white butcher paper, old book binding tape, watery paint, wall paper and used mat board for the covers, a torn piece of plastic table cloth for the wrapping.

The pages are taped side by side in a concertina fold and glued to the front and back covers. The pages may be turned one at a time or the book may be opened as along banner. There is a memorial banner attached to the back that may be read if the book is opened from the back cover. 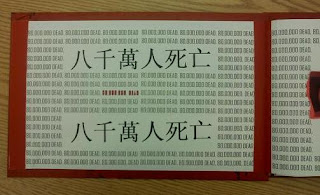 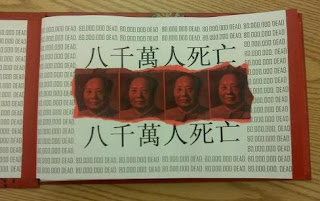 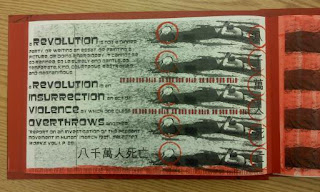 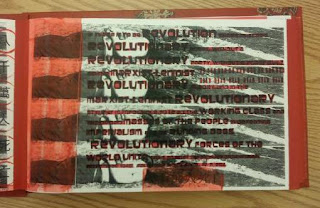 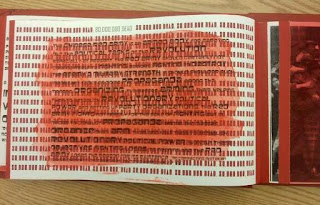 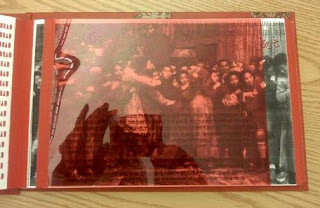 The black printing on the xerographic image was difficult to read until I placed the red transparency sheet over the page. If the transparency is turned back over the preceding page the text can be read through the red smear of paint. 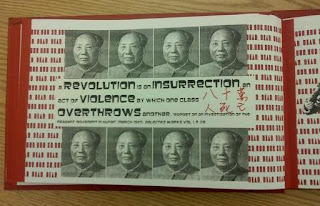 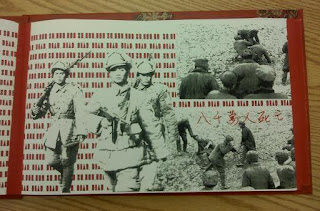 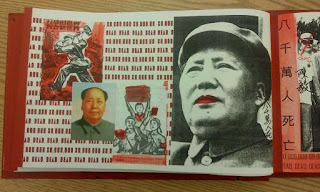 I couldn't resist painting the lips. 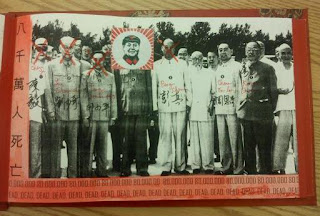 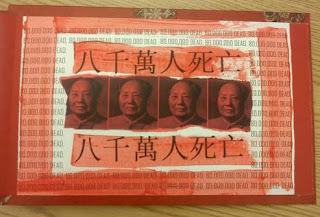 Although red is the color of happiness and joy, I have used it for "blood" to smear on the white pages of the memorial for the dead. The white memorial banner is attached to the back. 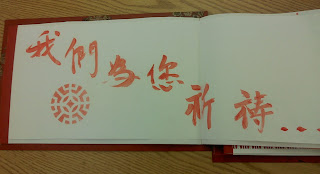 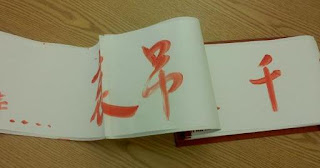 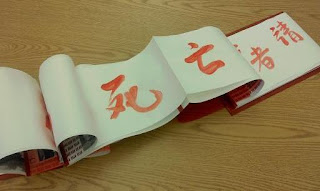 After the weeks of working on this book, I am relieved and grateful to be finished. It was spiritually oppressive to work on, and I felt as if a great weight were crushing my chest each time I took up the labor and heard the unrelenting, repetitive music throbbing in my brain.
The grade critique from the instructors, Marnie and Chris: "Michael! This is a real move forward in meshing the experimental with the traditional! The obsessive filing in of the counterforms is suggestive of marks made on a cell wall or some such, and it becomes a background, the horrible truth becoming like wallpaper, that jar the reader/viewer when it again becomes legible. Marnie agrees with Chris regarding the appropriateness of the materials, fitting to those that would be used by the oppressed to tell their story. We both feel like we should do some heavy research in Chinese political history in order to understand all the layers of subtlety. But the echoes of Maoist propaganda are loud and clear, even to those who aren't as familiar with the historical details. Fantastic enclosure device - elegant when displayed, suggestive of bondage when in place, and durable! One note: in terms of binding convention, the square is very large. The sounds of the crackling paper and the plasticy wrap add to the overall experience."
﻿
Posted by oldlibraryman at 8:54 AM 2 comments:

Here are a few of the St. Patrick's Day card envelopes that I sent out this year. The green is a crepe paper dye.  There were only a few shamrocks in my box of junk, so I used the stars because they were green and I had them. I hope all the envelopes made it throught the post office in tact. 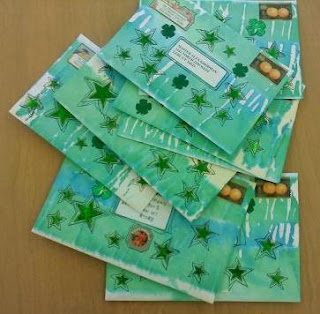 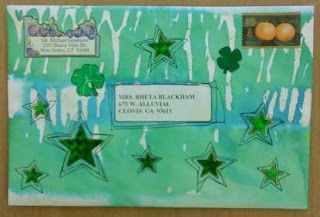 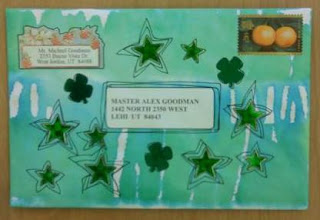 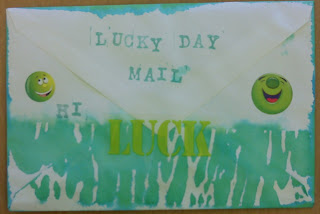 Posted by oldlibraryman at 5:16 PM No comments: