﻿﻿﻿﻿﻿ ﻿﻿﻿﻿﻿ Tonight we had four printing and paper decoration demonstrations and an hour or so to practice the techniques. It was fun doing gelatin prints and proof press printing again. We also melted bees' wax on pages for an interesting paper effect. The pages are translucent and smell like honey. Now I must create an origami folded book from one of the printed papers. Next week we have two days of book artist reports. As I have looked at several of the artists on the list we were given, I have been amazed that most of the early book artists were part of the avant guard art movements of the '50s, '60s, and early '70s. It is interesting that they were all drawn to the book form as a medium of artistic expression.

When I left the university campus and turned east on Sunnyside Drive, the full moon was just cresting the mountains. It was a gorgeous sight and a bit of a distraction trying to drive without gazing at the moon.

Artists' Books at the University of Utah, Part 3 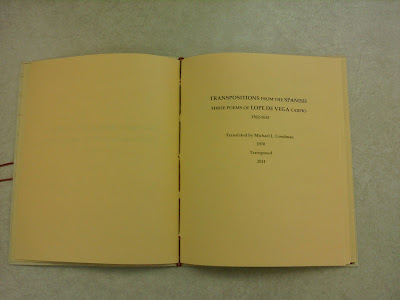 ﻿
﻿ We turned in our second book assignment tonight and had a round robin critique session. Some of the books were absolutely amazing. All of them were creative. Mine was a little on the standard side. I am, having a bit of trouble thinking out of the traditional format. I was hard pressed to come up with a text only or image only book. I wanted to reformat some old poetry of mine, but as I read through my stuff after many years, all I can say about my poetry is that it is very bad writing and even worse poetry! The only writing that was any good, well, very good were my translations of a few poems of Lope de Vega Carpio, 1562-1613. They are free verse translations which I feel convey his thoughts and images but are not exact translations. The poems are deeply religious, but they approach the subject from a strange point of view. I have always enjoyed reading them and find them thought provoking.

I decided to transpose the form of the poems from the standard poetry form in which I had originally written them and bind the signatures together with a pamphlet stitch. I agonized over the cover for several days and decided to use gold wallpaper and a red cord for the binding. The red cord I had in mind turned out to be too fine, so I dyed some gray cording red and used an exposed spine. I left the ends of the cord long to use as a tie to secure the cover.
﻿
﻿﻿
﻿﻿ ﻿
﻿﻿﻿﻿
﻿
﻿ ﻿﻿﻿ Artists' Books blog one.   Artists' Books blog two.
Posted by oldlibraryman at 9:57 PM 1 comment: 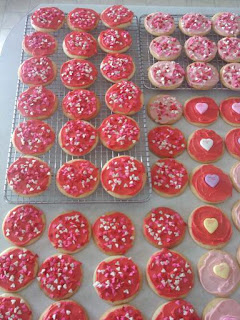 Today was a furlough day for the employees of the Canyons School District. My wife, Chris, who teaches in the Jordan District had to go to work today while I stayed home. I spent the morning baking six dozen sugar cookies. There was not enough powdered sugar for frosting so I went to the store. I also needed food coloring, but, alas, there was no food coloring at the store to which I took my "green" shopping bag. There was a tiny bit of coloring in the drawer at home, so I was able to make a little red frosting, and when I ran out of frosting, I mixed more powdered sugar into the bowl and created some pale pink. I then spent time taking cookies to my neighbors.

The rest of the day I cleaned house, read ten more chapters in Behemoth, my new favorite steam punk series, and cooked dinner for my lovely valentine. I had planned to take her out to dinner, but she said "no." Why? She still has tons, and I mean tons, of paper work to finish to prepare for report cards, parent conferences, and oh yes, she up for her three year teaching evaluation review this week.

I went to the Met premier performance of John Adams Nixon in China this morning. I was a bit hesitant. I like some, but not all of John Adams' music. Two years ago the Met broadcast his second opera, Doctor Atomic. I didn't like it at all and couldn't listen to it. I turned off the radio and busied myself with something else. I have heard pieces of this opera and liked most of it, so I decided that I would go see this broadcast of his first opera, Nixon, which was the Met premier performance. John Adams was the conductor of this performance and Peter Sellers, the original director of the opera, was the stage director for this Met performance. I love the HD theater broadcasts because of the "extras" like interviews and the back stage camera showing the scene changes during the intermissions.

I very much liked the first two acts, but I could have done without the last act. The innocuous description of the act does not prepare one for the sexual perversion depicted on the stage by Mao and his secretary and his wife. Listening only to that act would not have helped much since Madam Mao screeches the "F bomb" near the beginning of the act and everything disintegrates from there.

Oh, well. I know what to avoid now.
Posted by oldlibraryman at 8:14 PM No comments:

Artists' Books at the University of Utah, Part 2

The Artists' Books class I am taking at the University of Utah is a bit different than I was expecting: less making of books and more exploring the philosophy of bookworks. There is a lot of reading and some interesting discussion of what is "book arts." We do have to create four major works and several quick books based on class demonstrations. I must also do a 5 to 10 minute oral book artist report on the 22 of February. I chose Johanna Drucker as my subject. The rare books department at the university has copies of three of her bookworks that I may use in my report. They do not have Twenty-Six '76 Let Hers: Not A Matter of Permission, but there is a fascinating  page from that book on the Internet that I will use.

The second week of the class, Luise Poulton, of the university library Special Collections/Rare Books division presented a History of the Book and Artists' Books (pre-1960), wherein we were able to handle and closely examine 21 books from the collection. That may not sound too exciting for some people, but it is like I told my wife when I spent as much time as I could in the art museums in Washington, D.C: It is one thing to view a work of art in a printed source or on the computer screen, but it is an entirely different emotional experience to stand before the actual, physical object and embrace the reality of the object. I took notes on several of the bindings and formats used by the book artists so that I can experiment with my own books.

Last week we participated in paper decoration: paste papers, stenciling, various image transfer methods, all of which I have done numerous times; and Suminagashi, which I had seen demonstrated before but had not yet done myself. We then made a small accordion fold book with the decorated papers.

Yesterday was session number seven. Bill and Vicky Stewart, owners of Vamp and Tramp Booksellers, brought a wonderful selection of the books that they travel around the United States selling to collectors and libraries. There were several that I would have liked to buy, but they are way out of my price range. I will just have to make my own.

In the second batch of readings that we discussed last night in the class, there were several lines and paragraphs that jumped out at me. The following is from Book Arts in the USA by Richard Minsky, founder of the Center for Book Arts:


A single copy of a book is a curious thing. Even when part of a large edition, it is rarely considered disposable. People have books on their shelves that they haven't looked at in years, yet they don't throw them out or even give them away. A passing glance at the shelf gives a reassuring feeling, a reminder of the knowledge one has absorbed. They are old friends, these volumes, and just seeing them reminds us not only of their stories or facts, but of the time we spent with them. ...

In Book Arts the container works with the content. ...

Posted by oldlibraryman at 2:44 PM 3 comments: