I Am Glad I Don't Have Turner Classic Movies!

A few years ago, I broke down and bought a basic cable package through Concast. I have no interest in all the other channels offered on the higher paid packages. In fact, there are a whole lot of channels on the basic cable that I don’t want and never watch. I have always wanted to have Turner Classic Movies channel, but I don’t want to pay a lot more money just to have that one channel. I would gladly trade all the basic channels I don’t want or use just to have TCM.

I spent most of the last week up at my family’s time share condo at Snowbird. My parents bought the time share thirty years ago, and for many years they drove up to Salt Lake City from California to spend the week at Snowbird. My wife and I would drive the children up the mountain two or three times during the week to spend time with grandma and grandpa and swim and hike. Now it is just my family that uses the time share if my brother or sister doesn’t make the trip from California. 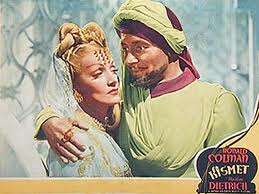 Anyway, this year I had Tuesday night and Wednesday at the condo alone because everyone else in the family had to work. The condo has TCM, and like the fool that I am, I turned it on. Caesar and Cleopatra (1945), staring Claude Rains and Vivian Leigh had just started so I watched it. Then Dream Wife (1953) with Cary Grant and Deborah Kerr, a pleasant little comedy, came on. This was followed by the non-musical version of Kismet (1944) staring Ronald Colman and Marlene Dietrich. Since I like both of them, I stayed up to watch. (He and his voice were magnificent as the “king of beggars,” and she was silly, but beautiful, as the “queen of the vizier’s harem.” James Craig was totally miscast as the Sultan of Bagdad, but I do like him in The Human Comedy (1943), one of my all-time favorite movies with Mickey Rooney, Fay Bainter, and Frank Morgan.) Finally, after midnight, and blurry eyed, I turned off the television and dragged myself to bed. 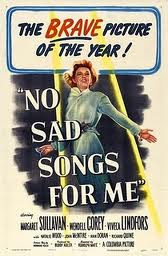 Wednesday morning, after sleeping in till after eight o’clock, I again tempted fate and turned on the television. I came in just after the beginning of The Green Promise (1949) with Walter Brennan, Natalie Wood, and Marguerite Chapman. It was Natalie Wood’s birthday, so all the films on Wednesday morning had her in them. The next film was Our Very Own (1950) with Jane Wyatt, Ann Blyth, Farley Granger and Natalie, followed by No Sad Songs for Me (1950), a real tearjerker with one of my five favorite actresses, Margaret Sullavan, and Wendell Corey, Viveca Lindfors, and birthday girl, Natalie. The last film I watched was a real turkey as far as I am concerned: The Silver Chalice (1954). I have seen it before, so I didn’t watch every minute of this silly sword and sandal drama with hokey religious trappings. Natalie was a young slave girl near the beginning of the film who grows up to be Simon Magus’s (Jack Palance) girlfriend (Virginia Mayo). I think this was Paul Newman’s first big part as Basil the young sculpture. The sets of this dreadful mess were obviously sound stages with all straight lines, angles and black backgrounds looking more like modernistic stage sets than epic movie scenery. Natalie certainly wasn’t as good as a teenager in this film as she was as a child in the first three.
So, after wasting all Wednesday morning and the night before watching seven movies onTurner Classic Movie channel, I am glad I don’t have this channel on my basic cable package. If I did, I would be getting even less done by wasting my whole life watching television: BECAUSE I LOVE OLD MOVIES.
Posted by oldlibraryman at 8:55 PM No comments: 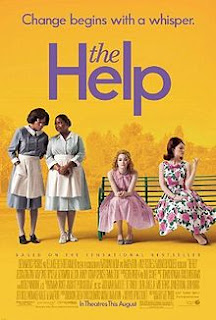 On Thursday the 14th of July, my wife, daughter, niece and I were able to see a preview showing of the film The Help, based on the best selling novel The Help. I was pleasantly surprised by the adaptation of the many storied novel. I do feel that substance of Mini's "horrible terrible" is revealed maybe a little too soon and made almost the focal point of the film and made to overshadow the more important issues of the story. (It has been a few months since I read the book, but I seem to recall that the full revelation of the "horrible terrible" had a more shocking impact even though many hints were placed along the way.) Of course, revealing it early does give the Hollywood types a chance to giggle and chortle over the multiple use of "four letter words."

Anyway, we all, having read the book, enjoyed the movie. It is a harsh glimpse into the harsh times of racial prejudice. I hope we have come a long way from these attitudes. The actresses did a superb job, and I hope there will be several award nominations in several categories for this film.

On Friday the 15th, my wife and I saw the last Harry Potter film. We both enjoyed it, and thought it was a fine finale to the series. I liked the vindication, somewhat, of poor ol' Snape, who I always thought had more to him than hating Harry. It has been a few years since I read the last book, and I can't remember how it was handled in the book. I will have to read the last book again; I read all the others a second time to prepare for the final volume. I was sad at the end, because it is the end, and there isn't any more.

Saturday evening I watch Great Performances on PBS. It was a movie version of Verdi's Rigoletto, staring Placido Domingo in the staring roll. It was a beautiful, high quality production, but it lacked something that a true opera experience must have: show-stopping thunderous applause, cheers, and bravos after solos, duets, and that fabulous quartet in the last act.
Posted by oldlibraryman at 1:01 PM No comments: