Musings for a dreary January day:

1) I was watching one of my favorite movies last week, which I haven't seen for a couple of years. A real schmaltzy melodrama from 1936, staring Mickey Rooney, Jackie Cooper, and Freddie Bartholomew: The Devil Is a Sissy. Rooney was 15, Cooper 13, and Freddie 12, but by 1936 they were all experienced, veteran movie stars. The boys end up in trouble with the law, but haven't broken any big ones, and have to meet with a juvenile court judge played by Jonathan Hale, who has a beautiful speaking voice by the way. He tells the boys that the devil is a "weak sister" a sissy because he can't take the heat; he causes trouble and runs away. A real "tough guy" takes his medicine, takes responsibility for his actions, fixes his mistakes. It seems to me that there are an awful lot of sissies in the U.S .of A. today. The slightest bit of rough going and they run away, or if they are big shots with huge screw-ups they run to the Federal Gummit to bail them out. Then there are all the "weak sisters" in the congress who are directly responsible for such things as the housing market collapse because they strong armed lending institutions to make home loans to minorities who had no conceivable way to make the payments. They whine and blather on and run away from their responsibility for the collapse by blaming others who had no hand in the sordid affair.
Anyway, I really like the movie. You can watch the whole film on you-tube starting at:


One small section of the film is missing from the clips, but it doesn't hurt the story line. 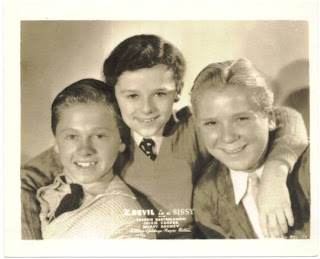 Here are Mickey, Freddie, and Jackie from a production still of the film.

2) I watched the coronation of the new messiah on Tuesday. After the inaugural speech, I thought maybe we were all supposed to quit our jobs and let the Great Gummit take care of us. I was disconcerted by the hate and disrespect that was shown to President Bush by the peace, love, tolerance and diversity crowd. Is it not strange how liberal socialist/progressives who preach love, tolerance, and diversity, not to mention environmental "green," spew forth such hate, close-mindedness,and utter contempt for opinions not their own, not to mention leaving the mall looking like a county garbage dump. Yes, I know that there are some conservatives who can be close-minded, hateful, and litter-bugs to boot, but conservatives don't claim, as liberal socialist/progressives do, to being THE party of love, tolerance, diversity, and uber protectors of the environment. So, it is difficult to over look when they are joyfully hateful and intolerant, and act like a bunch of "pigs." Oops! I shouldn't say that; it's not fair to the pigs. And who pushed over the porta-potties anyway?

3) It seems to me that all past Presidents have done some good and some bad things. Some have done more good than bad and vice-verse, they are only human beings, after all. But it really worries me when the majority of the people choose a president who says and does things that are not constant with the founding principles of our country, like capitalism. That to me spells BIG BAD. We have had a few BIG BADS in the past century, and it took years to overcome the damage.

Posted by oldlibraryman at 11:12 AM

Email ThisBlogThis!Share to TwitterShare to FacebookShare to Pinterest
Labels: Freddie Bartholomew, Jackie Cooper, Mickey Rooney, The Devil Is a Sissy