February should be red or red, white, and blue, but I look out the window and all I see is gray. I took down the winter decorations of January from the library and put up the red hearts and cupids for Valentines Day and portraits of Abe and George for Presidents' Day. But it is still gray outside with the threat of snow this weekend.

I just read an article by Pat Buchanan about the New York Times editorial page (whose editors relish labeling as racist hate mongers anyone who has a differing opinion or disagrees with their liberal/progressive view of the world) which seems to have been purchased by Carlos Slim, the Mexican billionaire who gave the Times $250 million to stave off bankruptcy. The last lines of the article say:

Let it be said. There is nothing wrong about Americans fighting to preserve the culture and country they grew up in. That is what patriotic conservatism is all about. And if the Times can understand and support the right of native tribes like the Navajo and Apache to preserve their unique character and culture, why this viral hatred of those of us who wish to preserve the Western and Christian character of America? Why does the Times want to see our America destroyed? From what poisoned well comes this hatred of the America we love?

It was an informative article. 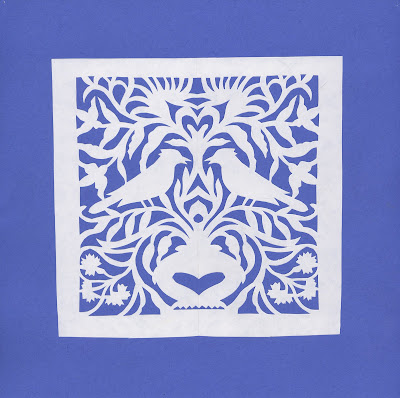 This is a scherenschitte (paper cutting) I did several years ago. I am thinking of using it as a valentine card cover this year. It isn't mounted on red paper, but I think the blue sets off the negative space better. I also used a computer manipulated version of this cutting as an ATC (Artist Trading Card).


Here is another memoir which is basically from the Lordsburg period:

It was a source of disquiet when I grew up and discovered that a seemingly innocent song I heard my father sing in my childhood had racial undertones that have, with the passage of time, become what some people call “politically incorrect”.
When I was very young, I would hear my father early in the morning getting ready for work. He would sing or whistle while he was shaving and combing his hair and getting dressed. Our house was small and compact, and the thick, outer adobe walls seemed to amplify the sound of his voice on those cool, dark mornings. Sometimes I would pull myself out of bed and shamble into the bathroom to watch him shave.
“Some of these days,” he’d croon while carefully dragging the razor across his cheek, “you’ll miss your honey. Some of these days, you’ll feel so lonely.[1]” The words would get distorted when he shaved under his chin, and he would just hum while maneuvering around his upper lip and chin. Once in a while he would nick himself, and a thin crimson line would streak the glistening white shaving cream on his neck that vibrated when he warbled a note.
He liked to give a lot of vibrato to certain words like “woman” and “rings” if he were singing “Saint Louis Blues.[2]” I liked that one. It was supposed to be a sad song, but he made it sound happy. “Saint Louis womaaaaan, wid all her dimon’ riiiings, pulls dat man roun’ by her apron striiiings. Da da da daaaaa, da da da store-bought hair …” There was whistling the melody or “da da das” to cover the places where he couldn’t remember the words or chose not to sing them.
The song I liked best was “Darktown Strutters’ Ball[3]” because he sometimes picked me up and danced me around. “I'll be down to get you in a taxi, Honey,you better be ready about half past eight.” We’d jive down the hall, and my mother would tell him to “pipe down” before he woke up my brother and sister. She said he sounded like a sick cow. His singing was wonderful to me, and I wish I could hear it again. “Now, Deary, don’t be late, I want to be there when the band starts playin’.” He’d flop me down on the bed and sashay over to the closet to get his white shirt.
“… Goin' to dance out both my shoes, when they play the ‘Jelly Roll Blues,’tomorrow night, at the Darktown Strutter's Ball.” He’d adjust his tie, slip on his jacket, give himself a last look in the mirror, and he was ready to leave for the high school where he taught history, P.E., and coached football, basketball, baseball, and track.
I asked him what “strutters” were and he said something about “high steppers” or “fancy dancers.” When I asked what “Darktown” was, he said, “Oh, that’s where Negro people live, black people.”
“Is that like Mexican Town?” That was the area of Lordsburg north of the railroad tracks where at that time all the Mexican families lived.
“Yep, like Mexican Town.”
“Do we have a Darktown?”
“Nope.”
And that was true. There were no black people living in Lordsburg. In fact, there were no black students in any of the eight schools I attended in New Mexico and Southern California until I went to Long Beach State College in 1965. I was not unaware of people of color, but I had no connection or contact with them growing up. While I believed in equality and civil rights and never heard racial put downs or slurs at home, my early impressions of African-Americans were stereotypical, based on old movies, songs, and television. As my age and experience grew, I recognized attitudes and actions that were offensive and demeaning to African-Americans through most of the 20th century. Although I still love the songs and the performers, I cringe when I hear Bing Crosby and the Rhythm Boys sing about the “darkies” dancing in the Mississippi mud, or see Al Jolson, Eddie Cantor, Judy Garland, and Mickey Rooney in black face putting on affected Negro accents.
While “Darktown Strutters’ Ball” isn’t as blatantly racial as many other songs from the period, often written by Black composers but sung by White performers, it now gives me a twinge of mental discomfort and colors my memory. My father knew the racial undercurrent of the song, slight as it might be, but he sang it anyway because he liked it. I can hear his voice in the back of my mind, and I sing along because I like it too. We both know that innocence replaced by knowledge is no fun.

“I'll be down to get you in a taxi, Honey
You better be ready about half past eight
Now, Dearie, don't be late
I want to be there when the band starts playing.
Remember when we get there, Honey
The two-steps, I'm goin' to have 'em all.
Goin' to dance out both my shoes
When they play the "Jelly Roll Blues"
Tomorrow night, at the Darktown Strutter's Ball”

You can hear some versions of this song on Youtube here. (The best one, by the Charioteers, has been removed, darn it!)
http://www.youtube.com/watch?v=rRR8ECI-1GQ

Here is Sophie Tucker singing the original 1911 version of "Some of These Days."
http://www.youtube.com/watch?v=V164YjqoFCw

Here is the only film recording of Bessie Smith singing "Saint Louis Blues" in a 1929 film directed by W. C. Handy himself.
http://www.youtube.com/watch?v=afS-jsXRBvQ