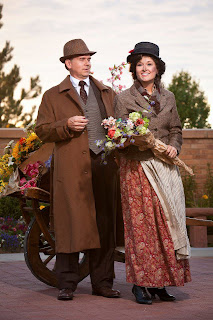 On the 10th of October, my wife and I went to the Hale Center Theatre in West Valley City to see My Fair Lady. I wasn't that excited about seeing the show again since I have seen the show and the film several times, except for the fact that our good friend, Mark Knowles, is playing Henry Higgins in this production. It was an excellent production, and Mark did a wonderful piece of work as the curmudgeonly Higgins. One of the early songs in the show is Henry Higgins's "Why can't the English teach their children how to speak?" After going though a litany of deplorable English pronunciations, Higgins says "the Americans haven't used it (English) in years!" Amen!

This is one of my "pet peeves," i.e. the lousy pronunciation and deplorable grammar of American speakers of English. It is not isolated among the young and illiterate, but is rampant in those who are supposedly well educated and should know better. The flattening out of diphthongs, sliding vowels and vowel pairs is epidemic in American speakers, and to hear such lazy pronunciation drives me crazy. Just ask my wife. I hope it is just laziness and not out right ignorance. My great fear is that being forced to hear incorrect language I may begin to speak the same way. I hear this in the speech of students, their parents, newscasters, advertisers, politicians, and broadcasters ad infinitum. Examples of this vocal crime: pronouncing "feel" as "fill," "meal" as "mill," "pail/pale" as "pell," "sail/sale" as "sell,"  and too many others to list.

Perhaps fifteen years ago, I saw a sign posted on a huge pile of dirt which said, "Dirt for sell." The writer's incorrect pronunciation of the word "sale" had led to his misspelling of the word "sale!" I see this phenomenon quite often in children and adults. They mispronounce and therefore misspell. I have seen four times in the newspaper this week the incorrect spelling of "than" as "then," as in "more then" or "less then" instead of "more/less than." Are there no proofreaders anymore?

The death of grammar is accelerating because grammar is no longer emphasized or even taught in school language arts classes. Supposedly, children will pick up correct grammar if they read a lot of books. Unfortunately, too many of the books children and young adults are reading have egregious grammar problems on top off the atrocious grammar they hear every day. There is the age old problem of "who/whom" and "can/may" and, of course, subject/verb agreement problems, but in the last few years there has been epidemic of the infamous use of the reflexive personal pronoun "myself" in place of the correct and simple subject or object personal pronouns "I" or "me." Some nincompoop must have thought using "myself" sounded upper class and started the corruption rolling. Now everyone from the President of the United States to the language arts teacher uses that corruption. Hearing that abomination is like ice picks jammed in my ears. I want to scream at everyone who blathers that ridiculous affectation.

But the true dagger in my heart is the death of the subjunctive case of "to be." It is a lost cause. Too few English speakers and writers use it any more even if they know what it is and how to use it. But if I were king, and I wish I were, I would drub grammar and elocution into every man, woman, and child so I might save my poor assaulted eyes and ears from seeing and hearing the murder of the English language one mispronounced word, one poorly constructed  phrase, one run on or fragmented sentence at a time.
Posted by oldlibraryman at 9:55 PM